So I’m about to start this new book my Jessica Macintyre, and I’m pretty excited about it. As I said, I’m trying to read as much as possible, and I’m really trying to read anything and everything. Fiction, non fiction, every genre, because I’ve been so tired of being stuck in a rut of the same type of book (Even though I love Meg Cabot) so I thought I’d share a little info on her, and her book I’m about to start so you guys can see if you’d be interested in checking her out as well 🙂

All authors need some love! It’s not an easy job writing an novel, and I admire anyone who can do it, because lately I can’t even focus long enough for a short story!

Well here’s a Book Blurb for The Vampires of Soldiers Cove: 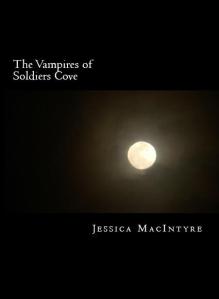 When 24 year old Rachel Landry, who suffers from a debilitating mental illness, receives a knock at her door one night from a stranger she gets an offer she can’t refuse. The chance to live as a vampire, gaining eternal life and relative sanity seems like a great plan. Soon she comes to realize she has been turned for a specific purpose and her vampire existence may be short lived. Also the handsome stranger may not be as much of a stranger as she thought. Facing her demons along with new enemies she must come to rely on her own strength to save her life, and the life of her new clan.

Some Reviewers have said:
“This book was a great book with a great story line. It was very enjoyable and doesn’t have a boring place in it .a must read for vampire lovers.”
“What I absolutely love about The Vampires of Soldiers Cove was, not only Ms. MacIntyre’s writing style – she has an excellent command on storytelling, grammar and editing, but I also loved the edginess, violence, power and hot sex. TVOSC is in no way formulaic. This book is deliciously dark, edgy and riveting”

Jessica MacIntyre was born in Sydney, Nova Scotia and raised in the tiny rural community of Soldiers Cove. A habitual daydreamer, MacIntyre was sent to the principal’s office many times during her school years for not paying attention in class. In 1998 she moved to Dartmouth, Nova Scotia with her husband and began writing seriously a few years later. Her first novel, “The Vampires of Soldiers Cove” is available now on Amazon and is the first in the “Vampire Island” series. MacIntyre has also published a work of Paranormal Erotica titled, “The Slave Queen also for sale on Amazon.
She lives in Dartmouth, Nova Scotia with her husband and two children.

Check her out, like her on Amazon, and send her blog some love! 🙂