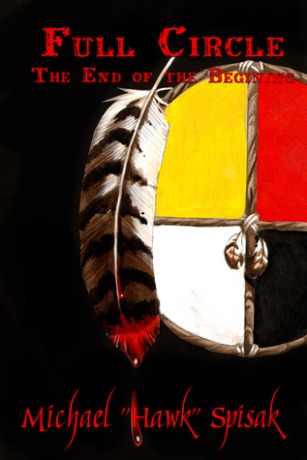 “Michael Hawk Spisak’s Full Circle is a devastating introspective into Native American culture and ceremony, spirituality, humanity, and society at large. Told from the perspective of Jackson, a white/Native American mixed blood, Full Circle questions the status quo of American society while revealing the causes and effects of colonialism and manifest destiny.

Full Circle’s drama is both intense and realistic as Jackson’s journey leads us to places and to people most Americans don’t know exist. Spisak shines a light on taboo subjects from the historical policy of genocide by the US government to the exploitation of spirituality by greedy and often deluded people.”

This is an incredible journey; a heart-wrenching portrait of the Indian people and life on reservations.

We follow Jackson, a mixed blood, who is going through his life’s journey. This book covers such strong and painful topics, dealing with the reality of Jackson’s life, and his struggles.

We see the hell that Jackson has gone through, his mother has gone through. We see him through Sundance, having visions and going on his life’s journey. The finale of which leads to the killing fields.

There is blame in this book, blaming people, government, life, but the character is doing something about it, instead of just accepting his situation. He tries to change it, fights for it.

The author asks a lot of tough questions, and shows us situations we’d rather overlook. We see the treatment of Native Americans, throughout history and even today through the eyes of the character, as well as the author.

You need to have an open mind for this book, but with that open mind, along with the author’s skill in painting pictures, you will be taken on a journey. You will be faced with questions that you need to answer, and you will see a side of people living in Indian Country that you’ve never seen before.

This book taught me things, I never knew much about indian culture, and this book was a crash course. It’s raw, and real, and may be hard for some people to read, but I would recommend it. It’s enlightening.