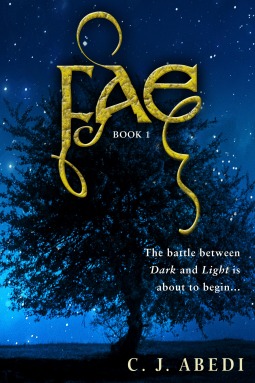 The battle between Light and Dark is about to begin.

Caroline Ellis’ sixteenth birthday sets into motion a series of events that have been fated for centuries. A descendant of Virginia Dare, the first child born in the lost colony of Roanoke, and unaware of her birthright as the heir to the throne of the Light Fae, it isn’t until Caroline begins a tumultuous relationship with Devilyn Reilly that the truth of her heritage is revealed.

Devilyn is the only Fae who is both of the Light and of the Dark, and struggles to maintain that precarious balance to avoid succumbing to the power of the Dark within him.  He is the only one who can save Caroline from those who would destroy her and destroy all hope for unity among the Fae. He promises Caroline that he will protect her at all costs, even when it means protecting her from himself.

Told from the alternating perspectives of Caroline and Devilyn, FAE draws on mysteries, myths and legends to create a world, and a romance, dangerously poised between Light and Dark.

I love stories about fairies, fae and sprites. All of them. YA lit has had tons of them floating through, some notable ones like The Iron Fey series by Julie Kagawa and Wicked Lovely series by Melissa Marr to name a few. I have read those series and many others. I love the magic, the mysticism, the lore of the fair folk. There’s so much that you can do with them from cute to scary. Each tale has a bit more to it then the last, and all the authors do an amazing job weaving the fae legend in their own way.

C. J Abedi is no exception. I’ve read the reviews, I’ve seen people’s opinions, but honestly, no, this is not the “next twilight”, to say that would be to lessen the impact of this book. This book is an original. It’s not like any other book, so don’t come into reading this book thinking, “Oh man, this is totally going to be like Twilight,” because it’s not. It’s a wonderful fantasy story dealing with light & dark fae, destined rulers and a whole lot of other drama! It’s a perfect YA book. Just enough romance, drama, suspense to keep the plot moving and littered with wonderful fantasy build from lore. This book will appeal to the readers of the Iron Fey series and Wicked Lovely series for sure, so if you’ve read these books, loved them, and are dying because either the next one isn’t out, or they’ve ended. Pick this book up. You won’t be disappointed.

The characters are very realistic, dispite being Fae, but at times can be a tad bit shallow, but if you look into the fae and the ideals, the fair folk are vain. They are shallow, and a bit shelfish, it is their nature, so I wasn’t really put off by this, because you can’t expect characters to be perfect in book one. They need to grow, develop and have life thrown at them.  The characters do tend to focus on their relationship, or lack thereof quite a lot, and I think it was a bit of an overkill for book one, but it didn’t make me stop reading.

Another awesome addition was the hints of Norse mythology in this book. It wasn’t a prevalent theme, there’s no Thor or Loki, but I think with the fairy lore as well this made a very interesting dynamic for the whole book.

I am glad I requested this title from NetGalley and if the second on is/will be on there, I’ll request it as well, if not, I’ll probably check Amazon and the library. I love fairy stories, they have a special place in my heart and this one will be among them, yes, it wouldn’t be the best fairy book written, but it’s just starting out, it has so much potential for future books, and the author could create one of the best fairy stories. Time will only tell.

C. J. Abedi is made up of the sister writing team Colet and Jasmine Abed who wrote the upcoming series Fae.  They have always had a love of writing and began collaborating on many projects when they were very young.  Their passion for all things creative led them to the world of the entertainment industry where they have worked since completing their education.