Today we’re featuring Amanda Lyons, author of Eyes Like Blue Fire, which we’ll also have our review up for! 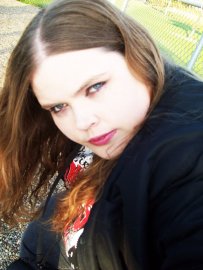 Welcome Amanda, thanks for being on the blog, so first question. Why horror? Why did you decide to write your novel in the world of vampires, ghosts, ghouls and the creepy?

Thanks and no problem I like doing interviews! I’ve loved horror my whole life, it gave me a certain sort of home actually. It’s odd but being the little girl who was afraid of everything and everyone it was nice to have something that validated and expressed my fears. It only makes sense then that Eyes Like Blue Fire takes place in this sort of world. Both Katja and Raven represent certain elements of my own understanding of the world and fear of things going wrong. It also expressed my long standing fear of moving on in my life. Sometimes you have to face that fear or things will start piling up and getting worse, Marie is certainly a good representation of that negative stuff coming to bite you on the butt. Our past also haunts us, it can be overwhelming trying to get past the big things that happen in our lives.

In Eyes Like Blue Fire, you’ve created such an interesting vampire. Usually we see vampires in two lights, one, dark, sexy, dormant or the other, lethal, cruel, and evil.. Katja is really not either of these, which is refreshing.. What made you come up with this vampire?

Katja represents a lot of elements of my own nature. A lot of things going wrong in my life led to me getting trapped in that mindset that everything would always be wrong. Katja isn’t able to move forward because she’s still trying to find something within herself that explains all of the bad stuff, that isn’t something she’ll ever find. She’s not an asskicking heroine and she’s not an anti-hero she’s honestly very human, and she suffers for it.  My vampires seem to stand outside of humanity in a way that reflects back the aspects of humanity that they retain, they’re almost ghosts in a way. I guess what it comes down to is that some people really do stand outside of the world we live in, not quite able to connect to it in the same way everyone else finds so easy. These vampires represent those people, lost and removed from everything else. They give that perspective a voice.

Villains, we all love to hate the villain. Marie is such a great villain in this story. How did you write such a dark character for your story? Was it hard to get into that mindset?

Marie is cold and cruel because she never connected to anyone else in life. Lacking that empathy for others she has a hard time really getting anything from people. So she likes to make them react in extreme ways, she treats them like toys. I took little bits of her personality from people I knew in life and blew up those negative personality traits. She was meant to be a polar opposite to Katja who’s so clearly removed from vanity and cruelty. She also has to motivate Katja to face her past and claim what life has to offer after all of this time.  Marie was actually kind of fun to write. I’m nothing like her, being essentially like Katja. It was fun to take on her swagger and her manipulative nature because it was so alien to me. She’s a very bloody and vindictive creature.

There’s some romance in this story, though I wouldn’t lump it in with the other paranormal romances. How did you find the right balance of story and romance, without one overpowering the other?

You know the romantic angle and the horror in it have made this book very hard to market. Most horror fans aren’t fans of PNR or romance and most PNR fans don’t like their books too bloody or brooding. I call it gothic horror because that’s exactly how many of the old gothics were; full of mystery, bits of horror and romantic elements. They took their time developing the character and weren’t as much about the action as they were about what happened to the character over time. Anne Rice’s books were probably some of the last ones to take on that approach and people have gotten really used to either PNR or bloody and brutal horror vamps. I stand somewhere in between all of that. The level of romance isn’t something I really calculated. It was my first novel (the first draft was completed in 1999 and I spent years editing and rewriting it over time) and I let it all flow out onto the page with that first draft and tried to develop the story and plot over time as I went back to it. It was always more about this lonely vampire finally moving on with her life because she’d finally hit the brick wall we all hit before we get ourselves together and start to build a more solid person. Her personal bottom would be hard because she’d let her life stagnate for so long and being a vampire that meant the stakes were much higher.

The setting for Eyes like Blue Fire is wonderful and detailed, did it take a lot of research to write such a compelling setting? Was there a reason you picked that time? 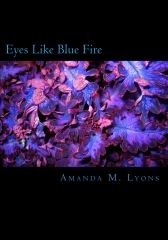 I’ve always read quite a bit of historical fiction and I thought I had the setting of that time down pretty well. Most of what you read in the book is all me writing it as I thought it would be. I’ve been told the dialogue would have been much different in that time and some of the interaction but I kind of overlooked that to make the story I wanted. The attention to detail was about the imagery I wanted to put into the story. These are the things that haunt Katja from her past so the colors and the light are all very clear because she’s spent so many years going over them. Is she embellishing? Maybe. I was very set on Katja being 301 I don’t even know why now, it’s really just a number but that’s why I set it in that period.

Lastly, the question  we all want to know.. what are your Halloween traditions?

We only really have a few in my house. Scary movies, trick or treating and enjoying the magic of October. We also like to light a candle for our lost loved ones as Halloween was originally Samhain and that was very much about the dead and their bond with the living. This year we have plans to celebrate with some friends at a little dinner.

A longtime fan of horror and fantasy Ms. Lyons writes character driven novels that while influenced by her darker interests, can also be heavily laced with fantasy, romance, history and magic. Amanda M. Lyons has lived her whole life in rural Ohio where she lives with her fiance and two children. Eyes Like Blue Fire is her first novel.Wendy Won’t Go, a novelette is forthcoming from J. Ellington Ashton Press and she’s currently at work on Apocrypha a short horror collection with Robert Edward Lyons II.

You can buy Eyes Like Blue Fire on Amazon, or read more reviews on Goodreads!

What a great vampire book! This is not a Paranormal romance! Don’t think that! There’s a bit of a romance element, but the main point here is all paranormal horror! It’s an amazing novel which deals with vampires in such a different light! Above all, they don’t sparkle! The general plot of this novel is engaging and well written, and it just gets better each page you flip!

I really enjoyed the setting of this novel, it’s so rich in detail and lends so much to the story. I really enjoyed reading this book, and each scene was very well described. The characters are so well rounded as well. I love that the vampires are one dimensional, they have a story, multiple emotions, mostly, and such wonderful character development throughout the novel!

This is definitely a book to pick up, horror lovers, it’s got the gore, the thrills and everything you are looking for. It’s well written and breathes new life into vampires. If you are only reading one vampire book, this should be the one because it blows the others out of the water in the horror genre! As i’ve stated, it’s not a romance! Go get it!

For today’s entry, it’s as simple as commenting on this post with your Halloween traditions! Let me know what you do on Halloween!

Winners will be announced on Nov. 2nd!

3 ecopies of The Risen: Margaret!  – Perfect for Halloween time!

We’ve got very few enteries so it’s a good chance to win!