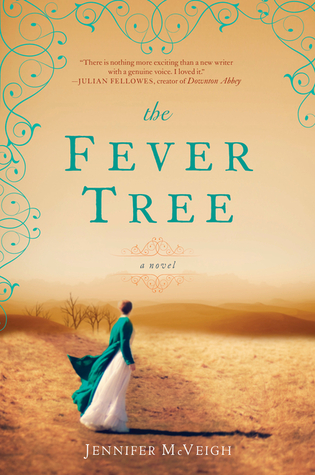 When it was first released in hardcover last year, Oprah.com raved, “Debut author Jennifer McVeigh has created a fully realized sensory tour of 19th-century South Africa: You feel the grit of each dust storm, taste the mealie Frances chokes down, hear the cicadas scraping through the heat-parched air along with Frances’ plaintive piano playing.”  McVeigh’s charmed story of loss and love has also been featured in Good Housekeeping, Women’s World, USA Today,  Washington Post, The Guardian, Daily Mail, and more.

With a perceptive and penetrating narrative, McVeigh unspools the story of Frances Irvine, a young Englishwoman forced by hopeless circumstance to immigrate to the Cape in pursuit of a reluctant marriage. There she discovers a strange new world where greed and colonial exploitation are bringing vast wealth to some and dire misery to countless others. As she struggles to find her place in this inhospitable land, Frances tethers her fate to two very different men: one serious and idealistic, the other charming and ambitious. When a smallpox epidemic threatens the financial dynasty of the most powerful Englishman in South Africa, Frances will be cast into a vortex of dangerous consequences—and find an unexpected, purposeful path.

A sweeping novel of romance and South African history that has been compared to Gone with the Wind, The Thorn Birds, and Out of Africa, THE FEVER TREE is an epic, heart wrenching tale not to be missed.

What a book! 🙂 I have vary particular taste in books, and so I always try to look closely at a book before I pick it up. I read the back of this one, I saw the comparisons, and the endorsements, but I wasn’t 100% sold. I’m glad I decided to hop on this blog tour anyway! This book brings  South Africa to life in vivid color. This book wasn’t perfect, hence the four stars instead of five, but I thought the author has such a talent, I was captivated. First books aren’t always a perfect home run, it doesn’t mean it’s not worth a try!

The main character, I felt, needed something more. I couldn’t really relate to her, only because of her dramatics at times, but I truly wanted to. She is left penniless, and in those times, you have two options, work or marry. She chooses the second, and marries a doctor. I don’t know if the author wanted to make us feel a violent urge to shake the silly out of the main character, but I wished I could quite a few times. Her choices, and reactions, though probably slightly understandable in the time period were upsetting to the reader. She falls for the wrong man, when the right man is in front of her, but she can’t see it. She’s the portrait of a naive, young, pig headed girl. She has a single minded focus, and that causes her to do some really dumb things in the book.

I do think the saving grace for this novel (and the reason for a strong 4 star rating) comes from the author’s wonderful ability to paint her scenes! Wow! She’s got such an outstanding talent. I felt the heat, I was on the ship, and I knew it all. She did a wonderful job bringing her reader along, and getting them settled right into the scene. Her main character might not be the best we’ve ever heard of, but for a historical romance, the history part of this is OUTSTANDING, it’s interesting while being mostly correct and realistic. She’s got a talent, there’s no question, and I expect to see another book from her, and I think, she’ll surprise us.

All this book needed to blow away the 5 stars would be a stronger, more logical main character who the readers could relate to. That’s something I’m sure the author can work on, and blow us away in her next book. Would I recommend this?  Yes, I think I would, honestly. Yes, there’s a few issues, but I think this book does something beautiful at times, and it’s worth reading! 🙂

*I was given a copy for my HONEST opinion. All opinions are my own.

Jennifer McVeigh, who has herself traveled to remote areas of Southern and East Africa, also drew on firsthand accounts of life in colonial South Africa, as well as nineteenth century guidebooks and women’s magazines, in order to infuse Frances Irvine’s experiences with arresting verisimilitude.  You can find her on the web at www.jennifermcveigh.com.