Today, Marie F Crow’s YA Debut goes live! Many fans of Crow have been anxiously awaiting this new title, to distract us from the wait for the next Risen novel. This story is something that I think really stands on it’s own, apart from her other titles, because she really did craft something unique, and unlike anything I have seen before! I am suffering a major book hangover, so much so I might go back, and read it again… This book has a solid base of interesting, diverse characters, and a plot line that will have you flipping pages faster then you though possible! 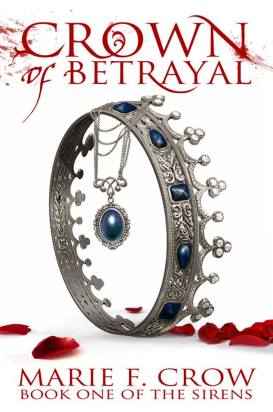 Verona has lived in the safety and bliss of palace and the luxury of what being a siren means. Content to live her life in the shadows of her beautiful mother, Ostila, and the enchanting dark beauty of her aunt, Morlena, Verona never thought about what life would be like should they be taken from her. At her mother’s coronation, these once impossible thoughts become shockingly real. Corander has lived his life in the shadows of his father, Kurt. As the head of the Empradar bloodline, Kurt holds no mercy for those who fail him and even less for those he distrusts. When the palace falls to madness. It will be Corander who is tested by his father’s desires and torn by his own. Together Corander and Verona must discover who they really are, and who they are truly meant to become, before all is lost to hidden plots and crowns of betrayal.

Buy it now on Amazon!

By now, I think people (except the author herself) just assume that I’ll love whatever Marie F Crow releases, but I honestly look at each story on their own, judge them on their merits and creative ideas and they blow me away every single time. I remember when Crow asked me… Mermaids, can they be saved? Can I make them awesome? I didn’t have a doubt. I had already flown through several Risen books, and I loved her style. It was detailed without pressing on you, but standoff enough to make you question everything you’re believing as the truth. This is her debut into YA, she’s the queen of the Zombies, but it was interesting to see how she’d craft her dark style into a good for a younger generation. I have to be the first to say, she KILLED it. This novel presented me more than I was even expecting.

I am 24, not the target, but I love YA novels, I’ve read many, I’ve read every book Meg Cabot has written, so I came into Crown of Betrayal knowing all the signs of the classic YA genre, and wondering how Crow was going to twist them.

First, her characters. Verona, the main girl, does some serious character development. You meet her, she’s a child, and she’s just background. Her mom is going to be queen, and Verona (or Rona as you will begin to call her) is content to stay where she is. By the end of the book, I don’t think you’d be able to recognize that same girl, she’s undergone such a change to her demeanor, in a really good way. This is a perfect example of what we strive for in positive YA. A female who isn’t defined by the male characters around her, this isn’t a Bella. Verona’s Aunt, another key character, wields death magic. I like this, she’s dark, creepy and a bit terrifying, I wouldn’t want to meet her in a dark alley, but as Crow taught us with Abigail series, you can’t judge everyone by how the look. There are also some interesting males in this book, like Corander, son of the leader of their guard, and friend and somewhat crush of Rona. If you do pick up this book, when you finish it, tell me… whose team are you on? I think currently I’m still #TeamDon’tMakeMePick, but if Crow provides us a second book, it could change. You can’t place bets too early, that’s what I learned of Crow. (Cough JD Cough)

We also look at mermaids through a new window in this novel… we see them in touch with their ancient roots… Sirens. This concept allowed us to bring in the darker side that Crow revels in. It was outstanding, I keep having to go back and edit my words as to not spoil the book, but I just want to fangirl. This book is spoiler city, so many twist and turns! Verona has yet to tap into her magic, which adds another really great element to this story.  The amazing abilities of some of the characters in this book had me caught up in awe, and other times, I had to cringe away from how creepy it was, but I think it kept a strong balance between strong story line, and interweaving all these awesome extras.

The final third of the book is where I went a little crazy. Things were changing all around me, and I honestly couldn’t read fast enough. Things you took for granted played out in vivid detail, and you’re right there with Rona, suffering, celebrating, and being honestly shocked. I will say I had to pick my jaw off the floor more than once. Do I think Crow’s YA debut is strong? HELL YES. She came into this party with a big splash, and I expect it to make some serious waves. I think this genre is a strong one for Crow, and I think the fans and readers will agree.  If you’ve ever wanted to slap one of the weak heroines in a novel, pick up this book. This will give you faith that there are author’s out there who want to empower the leading ladies of the YA genre, and you won’t regret the ride this book will take you on.

If you buy one YA book this month, or next, this should be the one you buy. It’s got everything those big name YA books have, but it also has a deeper level of heart, creativity, and wonderful style!

*I was given a copy of this book to read and review. All opinions are my own.

Marie F Crow is the author of the post-apocalyptic series, The Risen. She weaves her stories around the human element of the horror verses the “monsters” themselves. She believes that the real horror of life does not come from the expected, but from the unexpected responses of human nature and what depths of trauma a person has to survive in certain situations. She began writing The Risen series when feeling that the popular genre was slipping too deep into the realm of pure “slasher” and forgetting what the horror of zombies can mean for a story.

Now with her children’s series launched, Marie hopes to use her favorite “monster” as a teaching tool to inspire children to understand that not everything that looks scary, is scary. With Abigail and Her Pet Zombie series, Marie hopes to further spread her love for all things “that go bump in the night” with small children showing them that it’s okay to be different and to embrace those same differences in those around them.

Many projects in the works this year. Marie F Crow Publishing will debut two new series: The Sirens & Blood Cravings.